The excitement continues to grow at Saratoga Race Course as August has officially arrived! This Saturday, August 5, get ready for the 90th running of the Grade 1, $1.2 million The Whitney Stakes, one of the biggest events of Saratoga’s summer meet. Get in on the action! 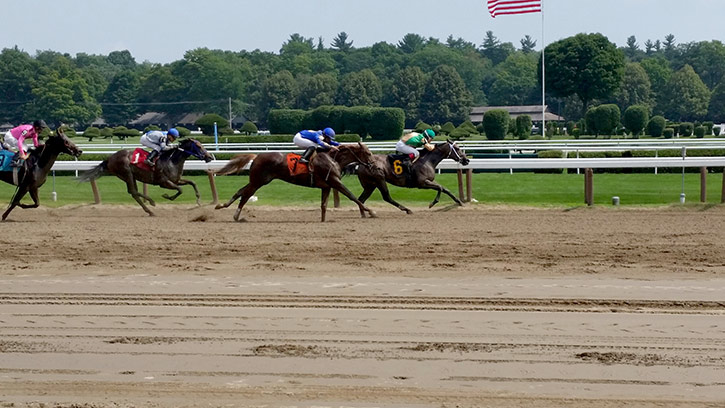 In a statement, NYRA’s CEO and President Chris Kay described The Whitney to be “a true highlight of the summer calendar at Saratoga.”

The Whitney serves as a “Win and You’re In” qualifier for the $6 million Breeders’ Cup Classic on November 6th at Del Mar Racetrack in California. If you can’t make it to Spa City, tune in to NBC for live coverage of The Whitney to see which horse will earn the golden ticket to The Golden State!

As a tradition, the winner of The Whitney Stakes receives a custom horse blanket made with hundreds of Marylou Whitney pink roses. Keep an eye out for the marvelous design in the winner’s circle along with the three-handled chalice trophy embellished with the historic Whitney crest.

Saturday also marks the beginning of the Fasig-Tipton Festival of Racing, a celebration of the partnership between NYRA and Fasig-Tipton. On Saturday, the festival will bestow the “Best Turned Out Horse” award upon one of the Whitney participants to honor the hard work that goes into daily grooming of thoroughbreds.

On August 7, 8, 12, and 13, Fasig-Tipton will be holding their annual Saratoga Sales at Humphrey S. Pavilion. Fasig-Tipton was founded in 1898 and these prestigious Saratoga Sales have been leading the industry with top quality thoroughbreds for almost a century! Check out the up-and-coming talent right here in Saratoga Springs.

It’s the road to the Breeders’ Cup Classic this Saturday at Saratoga! Giddy-up, grab a seat and watch some world-class racing.