The 2018 meet at Saratoga Race Course has entertained thousands of racing fans over the past four weeks, and although the season is halfway over, there is still much to look forward to! During Week 5 at the track, some of the highlights will include Adirondacks Day, Lustgarten Foundation Day, a Saratoga Blanket giveaway, and more. 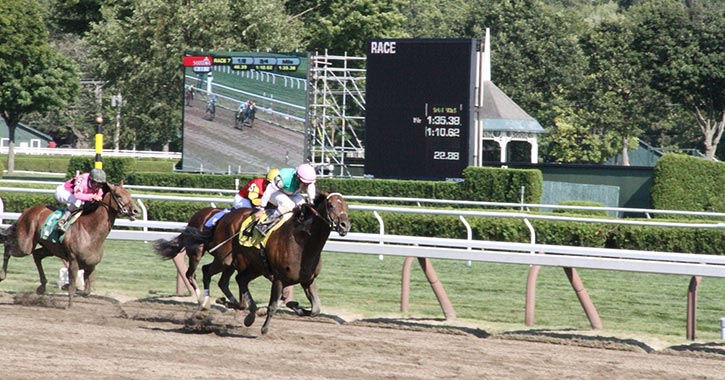 Place your bets for the Bolton Landing!

During the annual Adirondacks Day, Saratoga Race Course will celebrate the ADK with activities, exhibits, and entertainment at the Coca-Cola Saratoga Pavilion.

Place your bets for the Union Avenue (NYB)!

On Thursday, racetrack guests are invited to sample Aperol Spritz cocktails at The Post Bar from 3:30pm-5:30pm.

At Thursday’s Taste NY, guests will have the chance to sample an awesome selection of cider, wine, and spirits from NY State craft beverage producers. The tasting will be offered from 12:00pm-5:00pm and will be accompanied by live music.

Place your bets for the Skidmore!

Want to sample a great selection of craft beers that are produced right here in New York State? If so, then stop by the Coca-Cola Saratoga Pavilion from 12:00pm-5:00pm for Taste NY: Craft Beer. Guests will be able to enjoy five samples for $5.

After the day’s final race, Race Course guests are invited to enjoy bourbon cocktails and play trivia at The Post Bar. This event will be sponsored by Woodford Reserve, and it will run from 6:00pm-8:00pm.

Place your bets for the GI Alabama and the GII Lake Placid!

Shop for women’s and men’s apparel and accessories during Saratoga Race Course’s Fashion Saturdays series. Held at the Coca-Cola Saratoga Pavilion, this event will feature a variety of local retailers from 10:30am-5:00pm.

Woodford Reserve and Jeff Brisbin at The Jim Dandy Bar

On Saturday from 2:00pm-4:00pm, head to The Jim Dandy Bar if you’d like to sample the Woodford Reserve Saratoga Personal Selection. There will also be live music with Jeff Brisbin.

Sample the new Ketel One Botanicals at The Post Bar from 3:00pm-5:00pm.

Place your bets for the Summer Colony!

Visit the Coca-Cola Saratoga Pavilion for Taste NY: Food & Artisans, which will feature numerous food and artisan vendors displaying their products. This lively market will be open from 10:30am-5:00pm.

The Low Roller Challenge will take place on Sundays and Mondays at Saratoga Race Course. This is a chance for aspiring handicappers to experience the excitement of tournament play for $40. Registration will begin at 11:00am near the Fourstardave Sports Bar.

Place your bets for the Evan Shipman (NYB)!

The third Giveaway Day of the 2018 meet at Saratoga will take place this Monday! For each paid admission, racetrack visitors will receive a voucher that can be redeemed for a free Saratoga Blanket while supplies last.

Bring the kids over to the Coca-Cola Saratoga Pavilion on Monday for family-friendly activities, games, attractions, and more. The Berkshire Bank Family Mondays event series will be held from 11:00am-4:00pm.

The Low Roller Challenge will take place on Sundays and Mondays at Saratoga Race Course. This is a chance for aspiring handicappers to experience the excitement of tournament play for $40. Registration will begin at 11:00am near the Fourstardave Sports Bar.

While you’re in Saratoga, check out these local attractions >>